Is Cloud Interoperability a Myth? 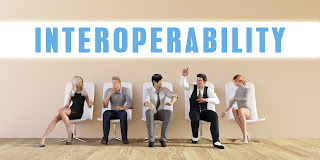 Photo credit: Shutterstock
As the industry matures, cloud computing will increasingly rely on interoperability in order to grow and deliver more value to industry. Assuming this is a fact, what does it mean when eighteen major OpenStack vendors come together to work through the challenges involved with achieving enterprise interoperability? Events at the OpenStack Summit in Barcelona helped provide a window into the promise of tomorrow’s interoperable environment.
In cloud computing, interoperability generally refers to the ability of service models from different cloud service providers to work together. Specifically:
·         Infrastructure-as-a-service
o   Access Mechanism – defines how a service in cloud may be accessed by users and/or software developers,
o   Virtual Resources – service delivery as a complete software stack of installing a virtual machine,
o   Network – addressing and API,
o   Storage – management and organization of storage,
o   Security – authentication, authorization, user accounts and encryption,
o   Service-Level Agreement – architecture format, monitoring,
·         Platform-as-a-Service
o   The exchange of data and services among different platforms hosted on different infrastructures on cloud;
o   Data compatibility among different platforms,
o   Portability between platforms
o   Data transfer procedures (i.e. packing, copying, instantiating, installing, deployment and customization)
·         Software-as-a-Service
o   Interoperability among applications in the same cloud,
o   Data exchange and operation calls in applications on different cloud-computing environments
o   Software programs that are distributed in different cloud environments and integrate data and applications in cloud in a unified way, and
o   Migration of applications from one cloud environment to another
If this isn’t enough of a challenge, one would also need to specifically address the many embedded and overriding interoperability aspects, including:
·         Technical interoperability – development of standards of communication, transport and representation;
·         Semantic interoperability – the use of various different terms to describe similar concepts may cause problems in communication, execution of programs and data transfers;
·         Political/Human interoperability – the decision to make resources widely available has implications for organizations, their employees and end-users;
·         Interoperability of communities or societies – there is an increasing need to require access to information from a wide range of sources and communities; and
·         International interoperability – in international matters, there are variations in standard, communication problems, language barriers, differences in communication styles, and a lack of common basis.
As one may imagine, the rapid growth of cloud computing and the global proliferation of service providers has created an intractable many-to-many interoperability quagmire that can never be tamed. Knowing this, the Openstack Interop Challenge looks toward cultivating success by leveraging the open source cloud technology as a common integration layer.  Participants include AT&T, Canonical, Cisco, DreamHost, Deutsche Telekom, Fujitsu, HPE, Huawei, IBM, Intel, Linaro, Mirantis, OSIC, OVH, Rackspace, Red Hat, SUSE and VMware. The goal was to publicly demonstrate how OpenStack delivers on the promise of interoperability across on-premises, public and hybrid cloud deployments.

Although you would expect this strategy would greatly simplify the integration challenge, contrarian views are out there.  One of the most vocal is Boris Renski, co-founder of Mirantis and member of the OpenStack board of directors. He believes interoperability does not necessarily start at the IaaS layer. He believes that applications can be built to be interoperable across different infrastructure platform. Quoting his OpenStack Summit keynote:

“Even across Mirantis-powered OpenStack clouds like AT&T and the Volkswagen cloud, they are both based on the same distribution, but the underlying reference architectures are dramatically different…Volkswagen can’t throw something at AT&T and it will just work.”

In this post I’m happy to report though that the participating OpenStack cloud vendors were able to announce a successful completion of the interoperability challenge. While this success is clearly a baby step on the long and treacherous road to cloud interoperability, it is worth noting because this modest achievement also led to the creation of automated tools for the deployment of applications across a variety of OpenStack environments.The effort also generated significant collateral on cloud computing interoperability best practices and is expected to drive even further interoperability collaboration across the Openstack community. 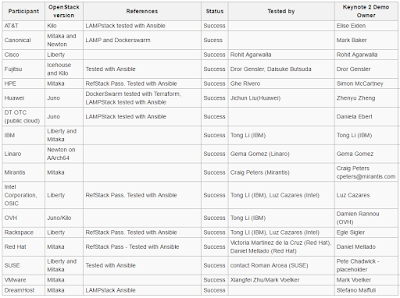