Now really. Should the Obama administration use cloud computing?

It’s amazing what a little radio time will do!

Since Sunday’s broadcast, I’ve been asked numerous times about my real answer to the question “Will ‘Cloud Computing’ Work In White House“. Although I would never assume to be in a position to advise the President-elect, I’m more than happy, however, to add my voice to the Center for Strategic and International Studies (CSIS) and the distinguished list of contributors that recently released the CSIS Commission on Cybersecurity for the 44th Presidency.

I truly believe that cloud computing technology can be used to implement some of their recommendations. One in particular is their recommendation for a National Office for Cyberspace (NOC) and a new National Security Council Cybersecurity Directorate (NSCCD). Along with the relevant agencies, these organizations would:

“Assume expanded authorities, including revised Federal Information Security management Act (FISMA) authorities, oversight of the Trusted Internet Connections (TIC) initiative, responsibility for the Federal Desktop Core Configuration (FDCC) and acquisition reform, and the ability to require agencies to submit budget proposals relating to cyberspace to receive its approval prior to submission to OMB.”

As widely discussed in cloud computing circles, Infrastructure-as-a-service (IaaS), platform-as-a-service (PaaS) and software-as-a-service (SaaS) are all the required components for desktop-as-a-service (DaaS). If applied to a private government cloud, this approach could be easily adopted for the Federal Desktop Core Configuration (FDCC). (Thanks goes to Avner Algom of the Israeli Association of Grid Technologies for this insightful graphic) 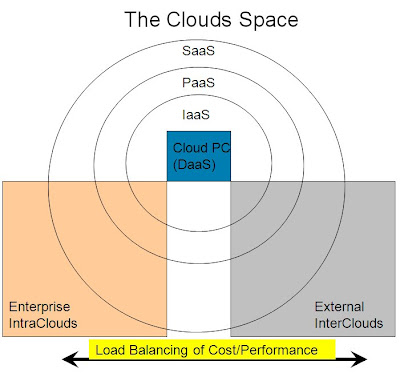 As I discussed on the NPR program, cryptographic data splitting could also aid in the management and protection of information in the cloud. As proposed in the CSIS report, the NOC and NSCCD would:

This would be akin to a “Federated Service Oriented Architecture” where a governance and security layer would be used to simultaneously improve cross-agency collaboration and inter-agency security. Couldn’t this actually be the basis for a governmental private cloud? By developing and implementing appropriate standards and protocols for the government-wide, federated SOA layer, the NOC and NSCCD could quickly implement the suggested federated regulatory approach.